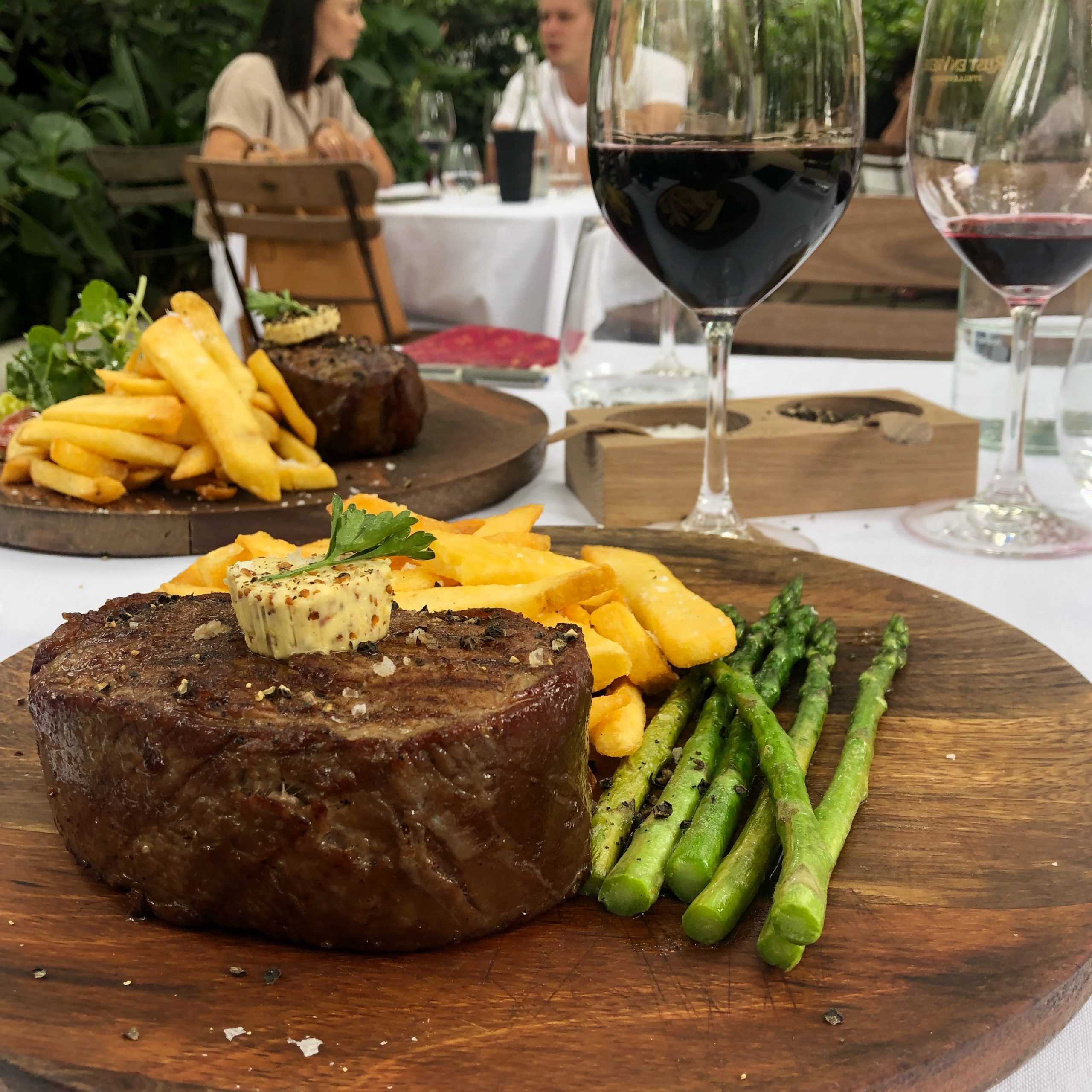 Rust en Vrede has always been one of my favourite stops, not only because of its breathtaking setting and organised and professional wine tastings but also the great attention to detail and magnificent wines it always produces. In fact, one of their wines, which I have returned to many times over the years both to store in my maturation fridge to age and to drink and enjoy is their Estate Wine.

The remarkable wine estate of Rust en Vrede lies halfway between Stellenbosch and Somerset West, nestled on the lower slopes of the Helderberg and approximately 15 km from False Bay. Always popular with international guests, this spectacular property was established in 1694, and has been producing wine for over 300 years. Jannie and Ellen Engelbrecht acquired Rust en Vrede in 1977 when they restored the estate. At the time, Jannie was more famous for being a former Springbok wing who had made 66 appearances for South Africa and his wife Ellen for being Miss South Africa 1963 and a Miss Universe semi-finalist that same year. Quickly adapting to their new life, Jannie made the first vintage of the modern era in 1978 after a re-planting of his vines to cabernet sauvignon, syrah and merlot. Though this emphasis has not really changed, nowadays, Jean Engelbrecht, their son, is the proprietor of the estate and Coenie Snyman the winemaker.

The full range of Rust en Vrede wines is available for tasting at the Tasting Room, which is open seven days a week (Monday to Saturday between 09h00 and 17h00; Sunday between 10h00 and 16h00). We were offered a choice of tasting options:

The Estate wine I tasted is a 2017 vintage – a great year for reds in South Africa. It is a blend of 60% cabernet sauvignon, 30% syrah and 10% merlot. Aged for 22 months in 100% French oak barrels, with 40% of this being new oak, the wine has big and bold tannins, with intense berry flavours and has great ageing potential. It can be purchased at the farm for R360 a bottle.

As it had long been my intention to visit Rust en Vrede for their lunchtime Winemaker’s lunch, 2021 was the year to do it. (All Covid protocols are in place.) Since you can’t book for lunch, which starts at 12h00 and finishes at 15h00, my mother and I arrived at 11h45. We had a choice of an outside table, decked with white tablecloths under the large oak trees, overlooking the rolling lawns and rose beds.

Served for R280 per person, the Winemaker’s lunch is a choice between Chalmar steak (either fillet or sirloin) or Norwegian salmon accompanied by hand-cut fries and a fresh garden salad. Since I don’t eat salad, I was without hesitation offered asparagus as a replacement. The sirloin is paired with a glass of Rust en Vrede Estate wine, the fillet with the syrah and the Norwegian Salmon with the Donkiesbaai Steen, which is made from old Piekenierskloof bush vine chenin blanc and is also one of Jean Engelbrecht’s wine labels.

My mother and I both chose the sirloin and I enjoyed one of the best steaks I have eaten in years.  There are not that many restaurants that can get a rare steak cooked to such perfection but Rust en Vrede certainly succeeded.